If you’re trading options with Goldman Sachs REDIPlus, Tradervue will now import your options trades! There is nothing special you need to do – just click Import Trades, select REDIPlus from the list, and follow the instructions.

If you’re using Lightspeed, we’ve added options support for you to Tradervue! No need to do anything special – just go to the Import Trades page, select Lightspeed, and follow the instructions.

If you’re using Fidelity, we’ve added options support to Tradervue! You don’t need to do anything special to take advantage of this – just go to the Import Trades page, select Fidelity, and follow the instructions.

If you don’t see your broker or platform on the supported list, let us know!

Tradervue merges executions into logical trades as you import your executions, and provides the ability to split or merge trades to give you flexibility in how they are grouped together.

It is fairly strict, however, with respect to exactly where you can split a trade apart. Specifically, it must be split at a point in the trade timeline where the position is flat. Normally, this is clear, but in the case of long-running option trades, there may not be a point where the overall position is flat. Consider the following option trade:

In this trade, we have purchased a June 170/175 call vertical. Later, we rolled this to July. What we’d like to see is the June vertical split out into its own trade, and have the July vertical start a new trade. However, we bought the July vertical on June 13, and sold the June on June 14 (or we could have let it expire). There was never a point during this trade where we were flat – so it cannot be split using the regular split facility.

There is a now a way to address this. We click the Advanced button just above the execution list, and we will see a new “Split options” link:

Click that, and we’ll see the new custom split page, where we see a list of all of our executions. We select the executions that should be split out into their own trade – in this case, the June vertical open and closing executions:

We have added support to Tradervue for mini options. They will be represented in Tradervue like this:

The “M” on the end indicates it is a mini option.

So far, the generic import format supports mini options (be sure to end your contract names with M as shown above), and the OptionsHouse importer will import mini options.

If you’re trading the mini options with any other broker, please let us know so we can update the importer to successfully import them.

We’ve added options support for Schwab users, including expirations, assignments, and exercises. As always, please let us know if your broker/platform isn’t on the supported list and we’ll try to get it added!

Tradervue has supported options trades for quite some time, and we’ve added support for a number of brokers and platforms that our options traders are using.

Unfortunately, some of these brokers/platforms do not include data about expired options (or sometimes exercised/assigned options) in their export data, which means Tradervue has no way to know the disposition of these options. This was a real problem, and up to now the workaround was to use the Generic Import Format to put together some execution data to reflect the necessary adjustments. Time consuming and error-prone, to say the least.

With the recent addition of the new Execution Editor, we also added a tool for managing open option contracts. To use it, open a trade in Tradervue, and click the “Advanced” link on the right side, just above the execution list. 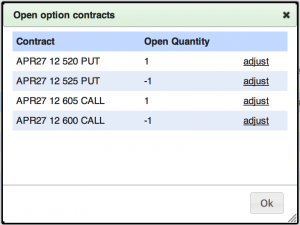 If you need to adjust any of your option legs due to expiration or any other reason, click “adjust” next to that leg. The execution editor will open, pre-filled with this contract name, and pre-filled with the quantity required to close the leg. You can edit any of the data for the execution, then save it – so to expire an option, you’d enter a price of zero, perhaps edit the date, and save.

This is definitely a much easier way to manage your open option positions!

Options support is available for everyone with a silver or gold subscription.

We’ve added options support for TradeStation users. As always, please let us know if your broker/platform isn’t on the supported list and we’ll try to get it added!