Tradervue’s trend reports are a powerful tool for discovering trends in certain performance-related statistics, such as Win %, per-trade P&L, MFE and MAE, and so on over time.

We have added the position MFE/MAE ratio to the trend reports. In general, a higher ratio (> 1) is better, as it means your trades are moving further in your favor than than against you (i.e., average MFE is greater than average MAE). A lower ratio (\< 1) means that, on average, your trades move against you further than they move in your favor (i.e., average MFE is less than average MAE). 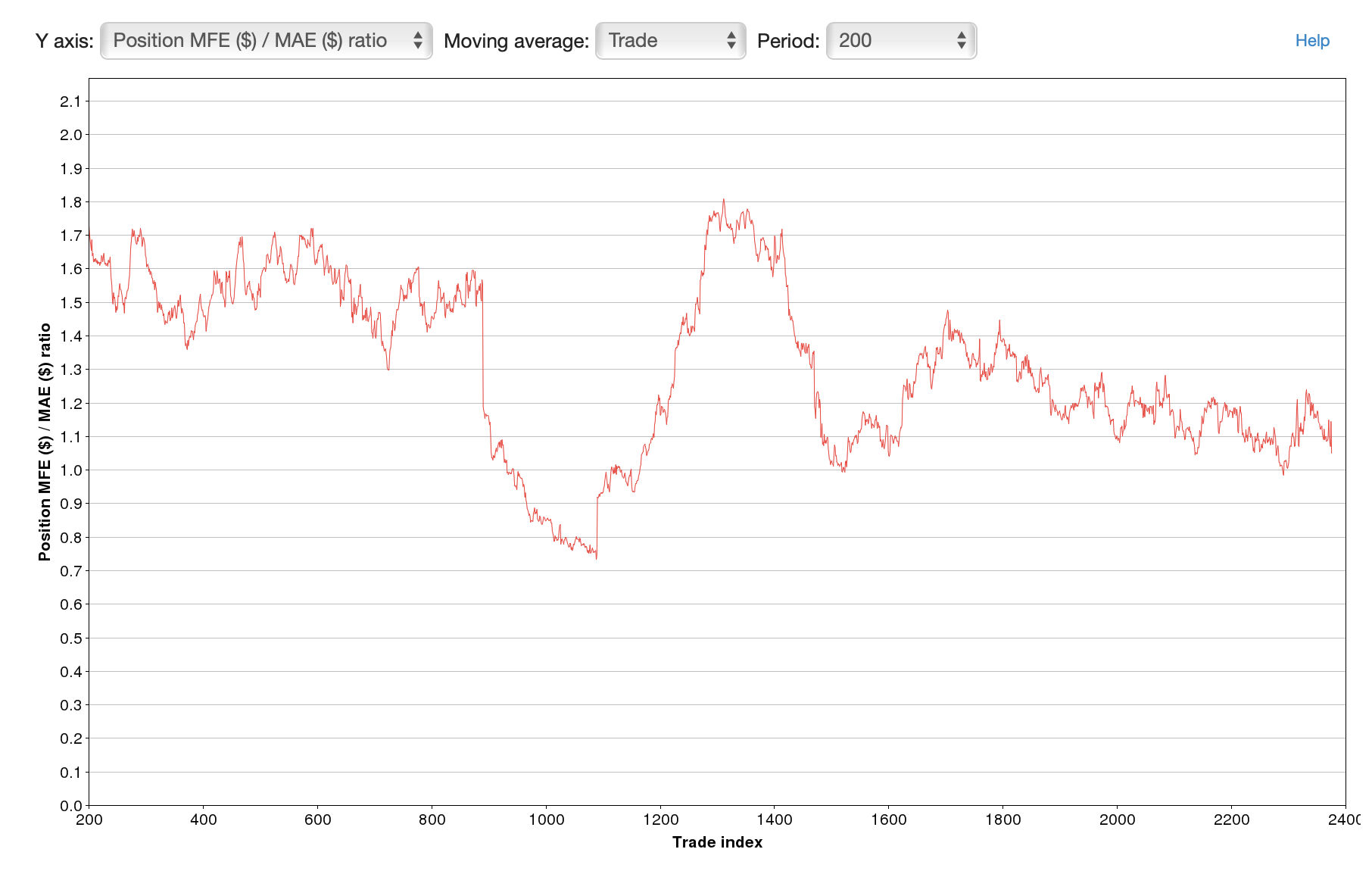 We have added new reports showing distribution and performance based on your entry price in relation to various moving averages for the instrument you’re trading. These can be surprisingly useful in identifying previously unknown patterns in your performance.

In the chart above, the “less than -5%” bar, for example, shows performance for trades that were entered at a price that was more than 5% below the 100-day SMA for that instrument.

These reports are available in Reports View, Detailed tab, Instrument group. They are also shown in the Win vs Loss Days and Compare tabs, in the instrument group.

So as an example, let’s look at the 10-day SMA chart for a particular set of trades:

With that filter enabled, if we now switch to the SMA(5) chart, we can see that we could potentially further refine our system by eliminating trades more than 1% above the SMA(5):

This can be especially valuable when, for example, the SMA’s are not part of your entry criteria for a trade, but the data reveals that they can help refine your system to improve the probability of winning.

SMA reports are available now for all users. Users on the free plan have access to the 50-day SMA only; silver and gold users have access to all of the supported SMAs. 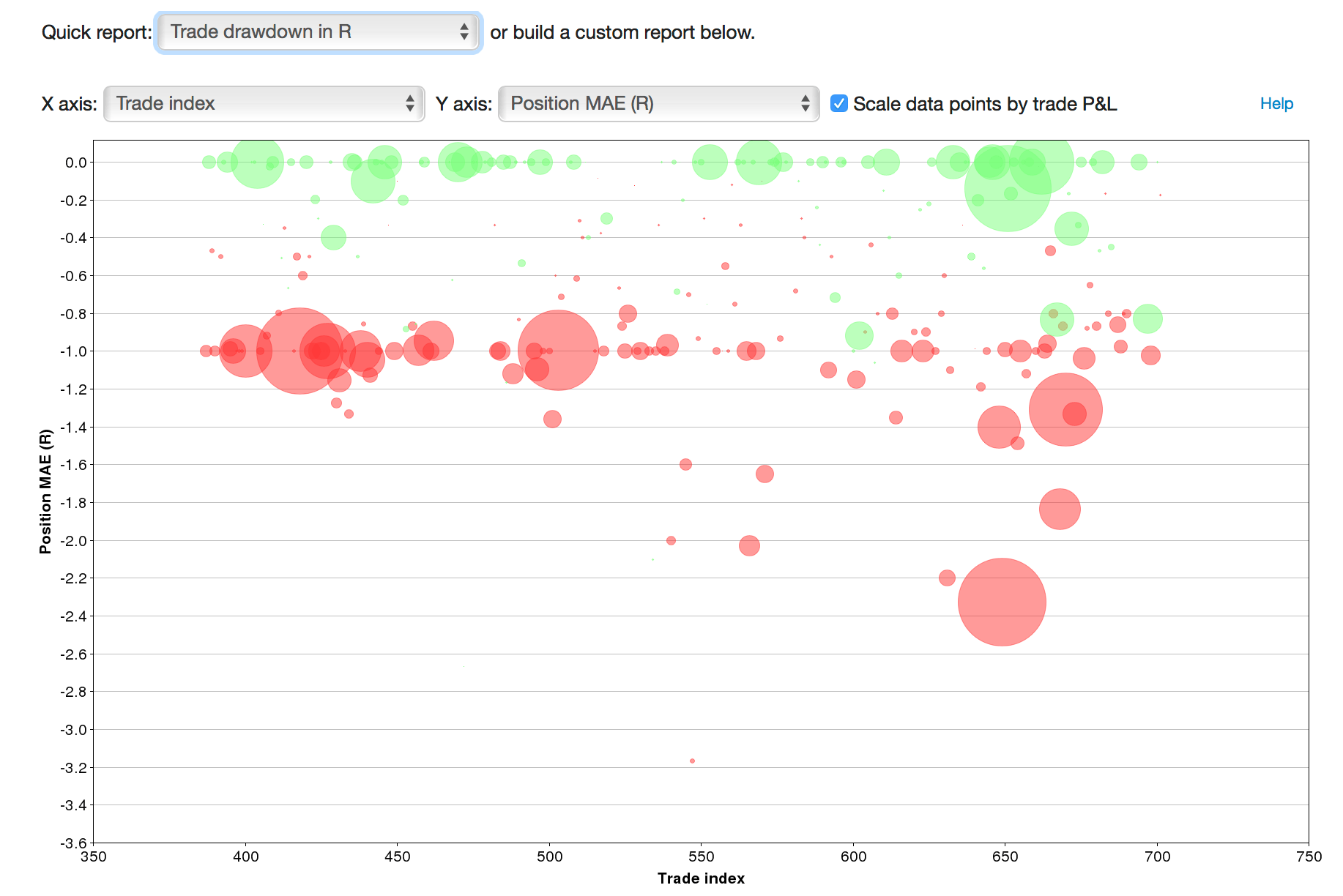 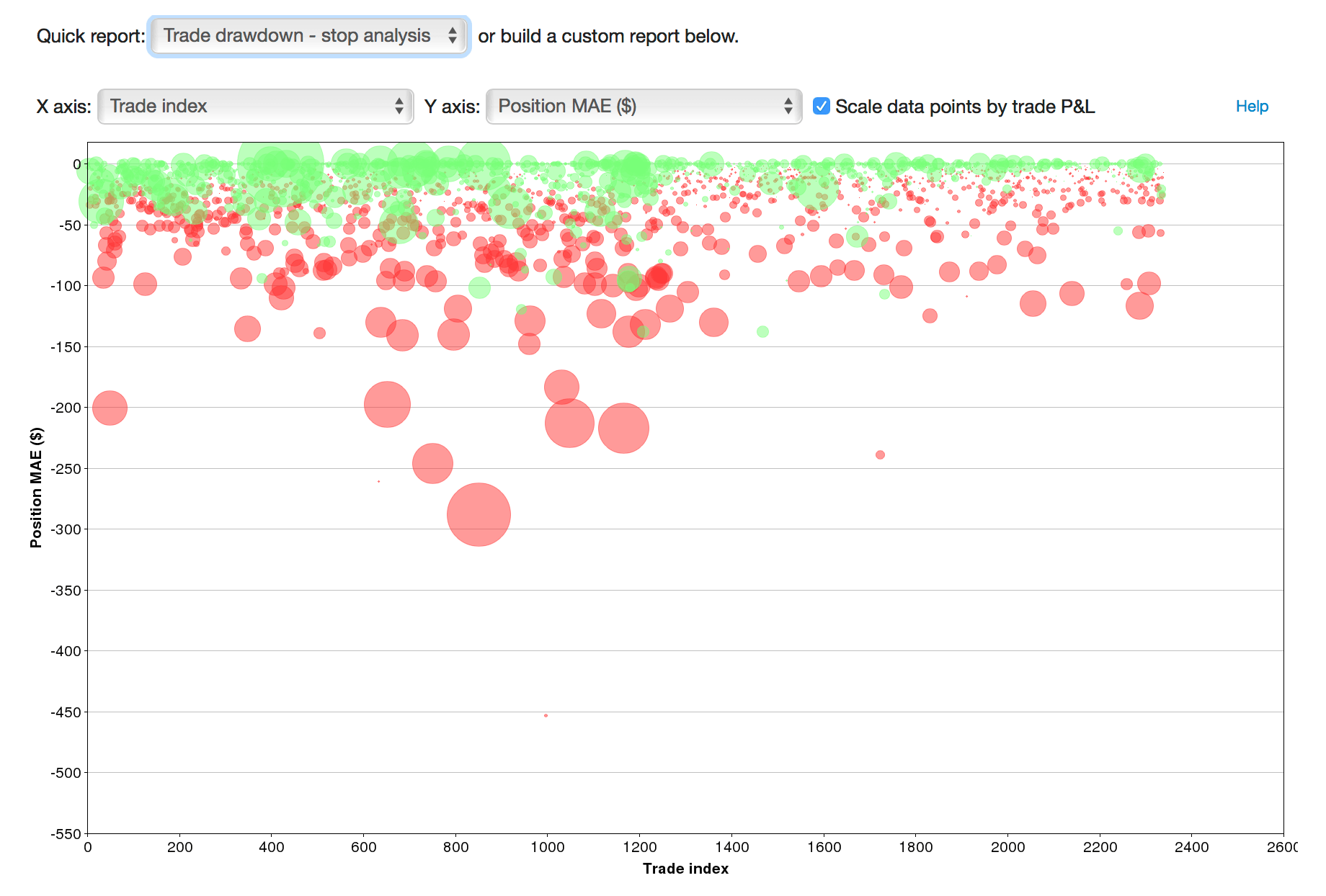 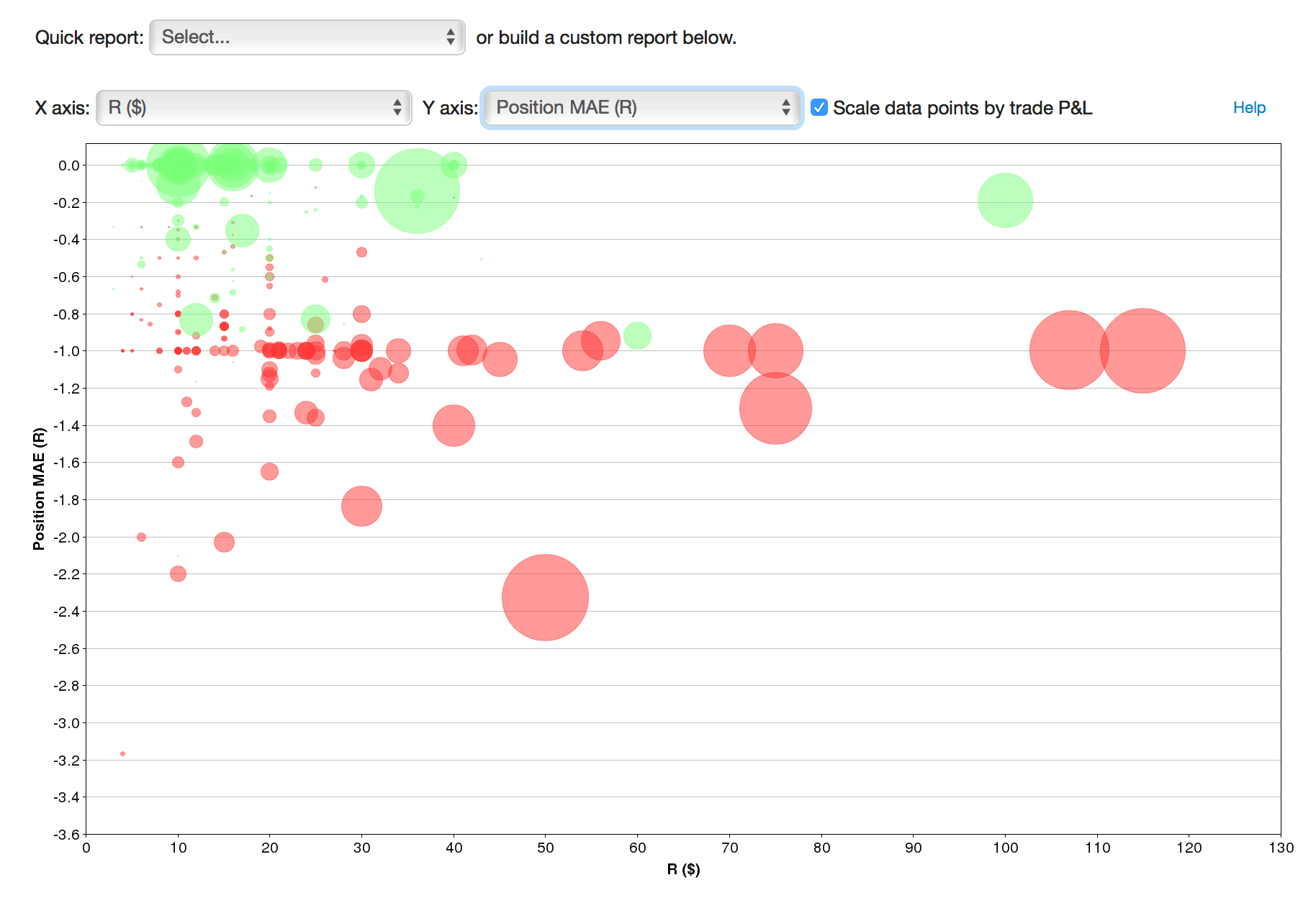 We have added a new report, showing distribution and performance for intraday trades based on how long you held the trades open:

You can find the new report in the Reports View, Detailed tab, Days/Times group.

The report is interactive, as well, so you can click on a bar in the report to create a filter showing only trades that make up that bar. So if you’re doing particularly well with your trades that are 2-5 minutes in duration, you can drill down into them for further analysis. If you haven’t used the interactive reports before, here’s a short (3:01) video demonstrating how to use them.

On the Overview tab of the Reports View, the Recent report group has always shown the most recent 30 trading days of data. Now, we’ve added options to see 60 or 90 days with just a click: 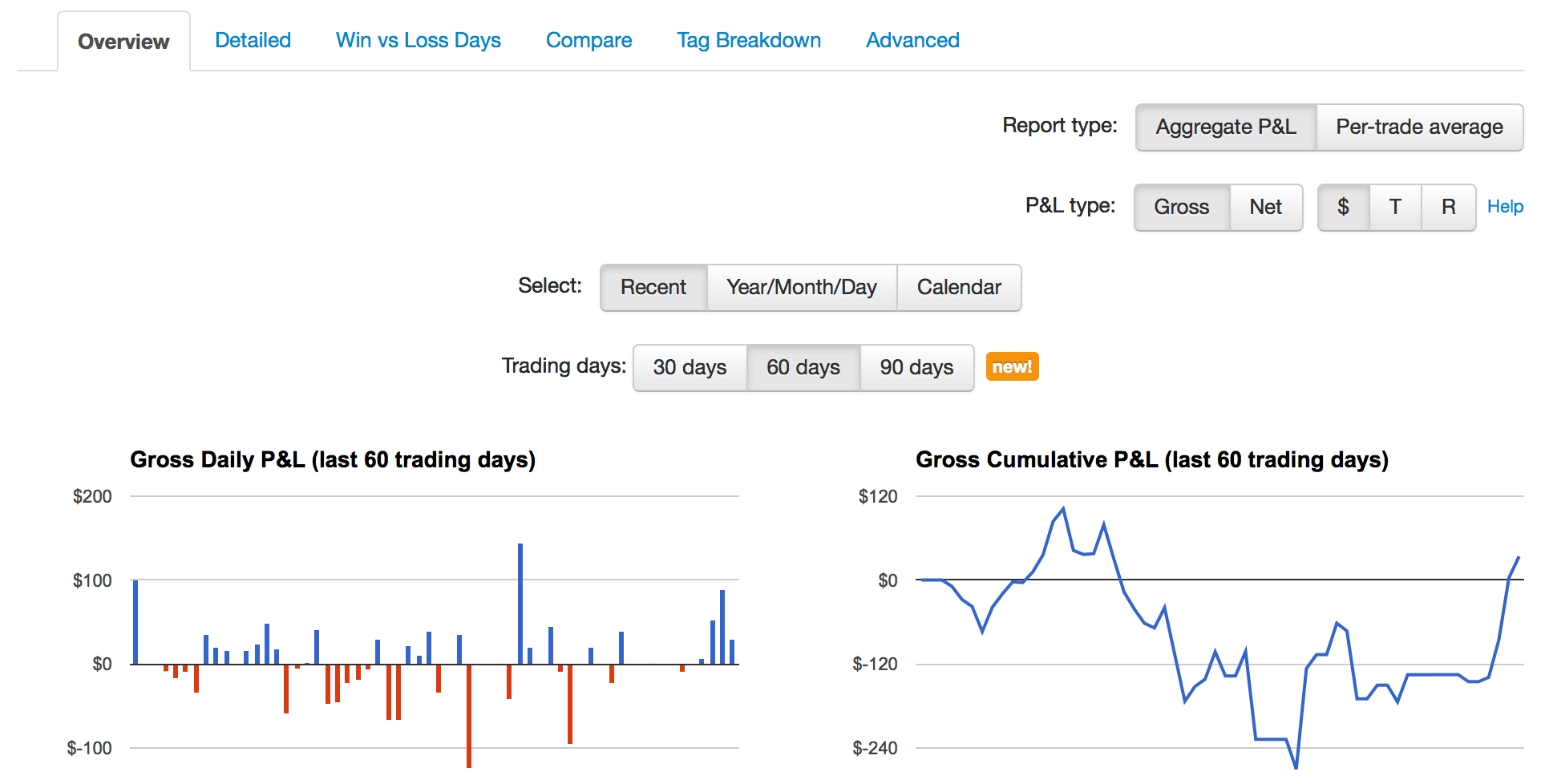 These reports work with either gross or net P&L, and either in dollars, ticks, or R (risk).

And as always, it’s possible to see your cumulative P&L for any time range and set of trades you wish by going to the Reports View, Detailed tab, Win/Loss/Expectation group.

A while back, we added reports into Tradervue that would show how trading performance related to the behavior of the underlying instrument, including its Average True Range (ATR). Today, we’ve added a new report related to these.

ATR represents the recent volatility in a trading instrument, in terms of the average daily range of movement in the instrument. The new report shows the True Range of the instrument on the trading day, divided by the ATR(14), expressed as a percentage:

This TR/ATR is a measure of relative volatility of an instrument; namely, did it move more or less today relative to its recent 14-day average range. The higher the percentage, the more the instruments true range on the day exceeded the ATR, and was thus more volatile than expected.

The new reports are available immediately for all silver and gold users on the Reports View, Detailed tab, Instrument group. They are also available on the Win vs Loss Days and Compare tabs.

You can now view weekly realized P&L performance, in addition to the year, month, and day periods. From the Reports View, go to the Overview tab, and click the Year/Month/Day group. Just below the yearly performance, you’ll see options for monthly and weekly: 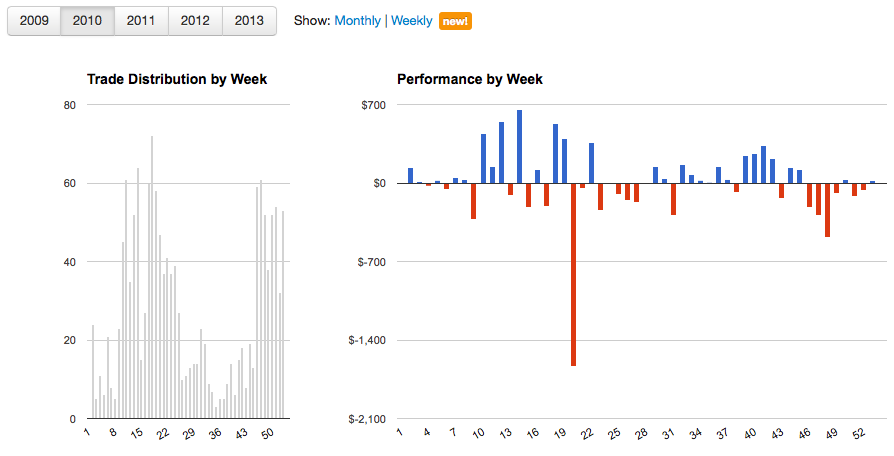 Just click “Weekly” to see your distribution and performance by week for the selected year. As with all of the reports, these can be run in terms of aggregate or per-trade average performance, either gross or net, and in units of $, ticks, or R.

For reporting purposes, a “week” runs from Sunday to Saturday, and January 1 is always considered to be in week 1.

The Market Behavior reports are designed to show your trading performance against what the overall market is doing; it’s shown based on market movement, gap, and day type:

We’ve always used the SPY ETF as a proxy for market performance. But as you know, not all markets move the same, and many users have asked to be able to compare to different markets. So today, we have added the ability to select which market proxy you would like to use for these reports:

These reports are interactive, and what’s really special is you can stack filters from different markets together.  For example, you can create a filter to show trades made on days where the QQQ gapped down over 2%, and the VXX closed up over 2%:

These new additions are available today for all silver and gold subscribers. Free subscribers will continue to have access to a non-interactive SPY-only version of the report.

We’ve enhanced the Hour-of-day reports to show additional intervals of 30 and 15 minutes,  in addition to hours:

Click one of the links shown, and the report will change to show performance broken out by 15- or 30-minute intervals.

These new options apply to the Detailed, Win vs Loss Days, and Compare tabs in the Reports View, and are available now for all silver and gold subscribers! 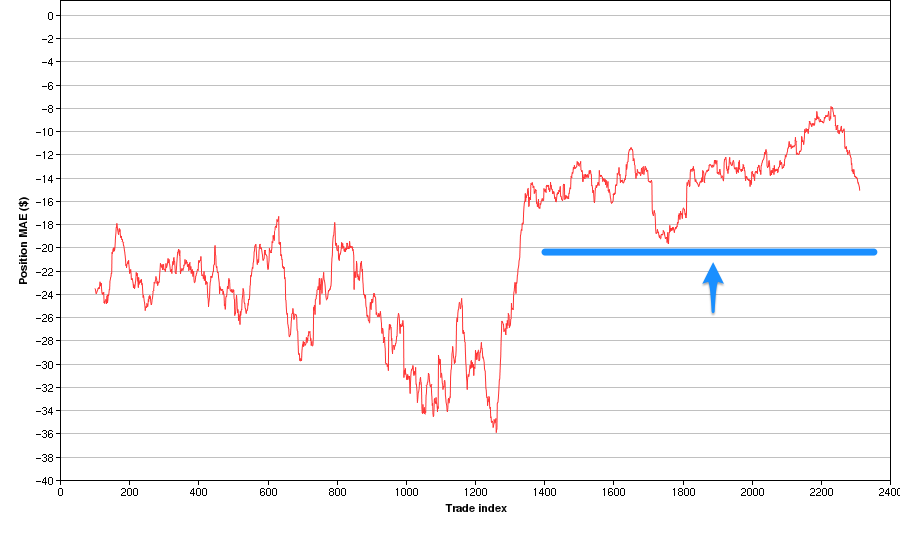 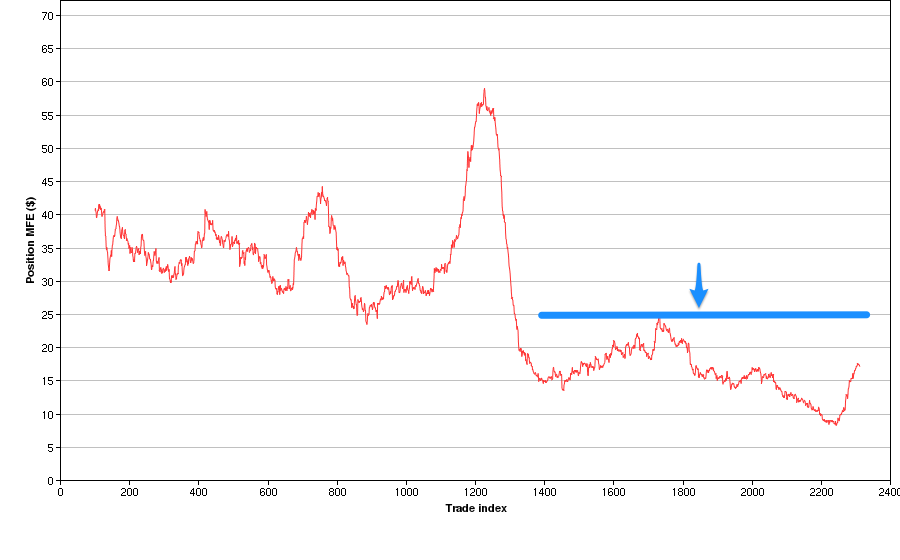