During the import process, Tradervue groups individual executions into trades. If you want to make changes to how these executions are grouped, we’ve had the ability to split and merge trades.

However, there have been limitations. Specifically:

To see where this could cause problems, imagine the following scenario. You have a single trading account, and you buy 100 shares of stock, as a longer-term position. Then a few days later, you buy and sell a new position in this same stock, as an intraday trade. So we have:

Up to now, if these were done in the same trading account, there was no easy way to split out the intraday trade (the buys and sells on 12/14) into its own trade, because you weren’t flat immediately before or after the intraday trade.

Similarly, for merging trades, if you had three closed trades in SPY (each with their own executions), one each opened on the following dates:

Today, we are making two changes to give you the flexibility to split and merge trades how you wish.

To do this, go to the detail view for the trade, click Advanced:

You can then choose the executions to split out into their own trade.

Merge trades from the bulk editor

You can now select multiple trades with the same symbol using the bulk editor, and merge them together:

This helps in two ways. First, if you have a number of trades you wish to merge together, you can now do this in a single operation, rather than having to merge them one at a time from the trade detail view. And second, you can now merge trades that are not consecutive in the timeline of trades in that symbol. In our example above:

These new features are available today for all users!

For some time now, we’ve had customizable columns in the Trades View.

You can now also customize your columns in the Journal View and the Dashboard! In both cases, it’s as simple as clicking the setup icon on the right side of the column header, and selecting “Customize columns…” from the menu: 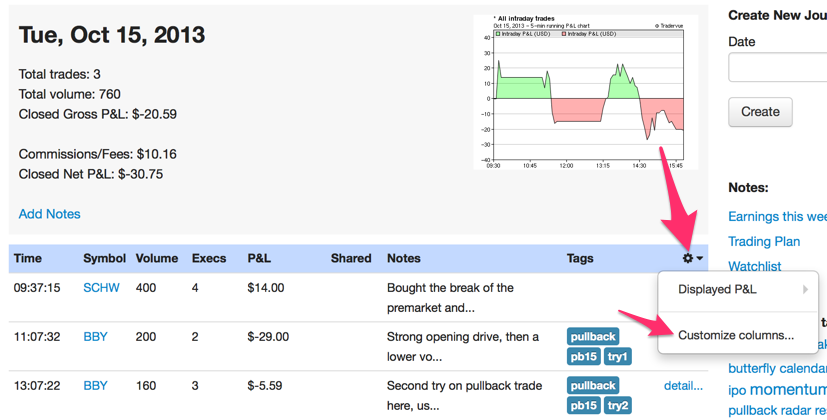 You’ll then be able to choose the columns you want: 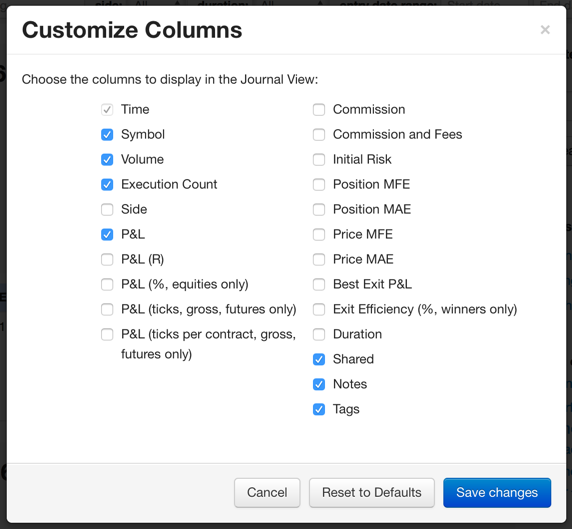 You can independently change the columns for the Journal View, the Dashboard, and the Trades View, and they will be saved separately. Set up your journal any way you want it!

Entry and exit price columns are now available in Tradervue. Entry price has actually been available for a while, but exit price is brand new.

Here’s how entry/exit prices are determined:

The third case above handles the case where you’re trading, for example, a covered call. The entry/exit prices will both reflect the stock price you executed at, rather than the option prices.

Both entry and exit prices are available in the following locations:

We’ve added a new way to view your trades in the Trades View. If you click the Settings button over on the right side, you’ll see a new “Display Mode” setting: 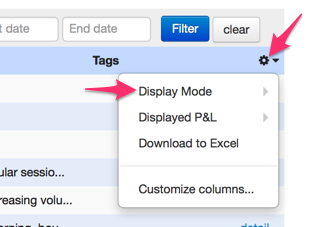 There are three settings to choose from:

Here are examples of how each view looks. 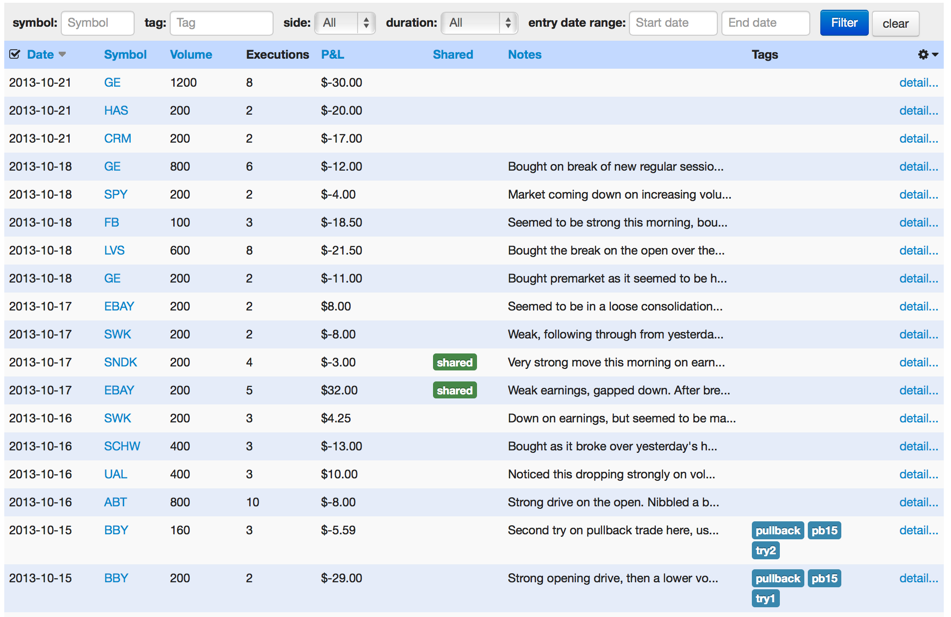 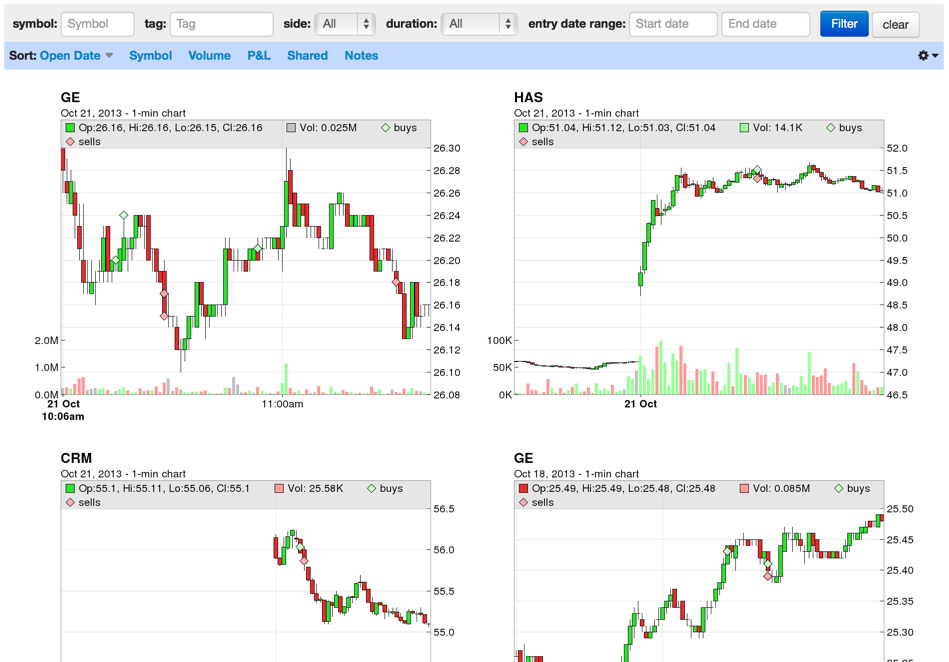 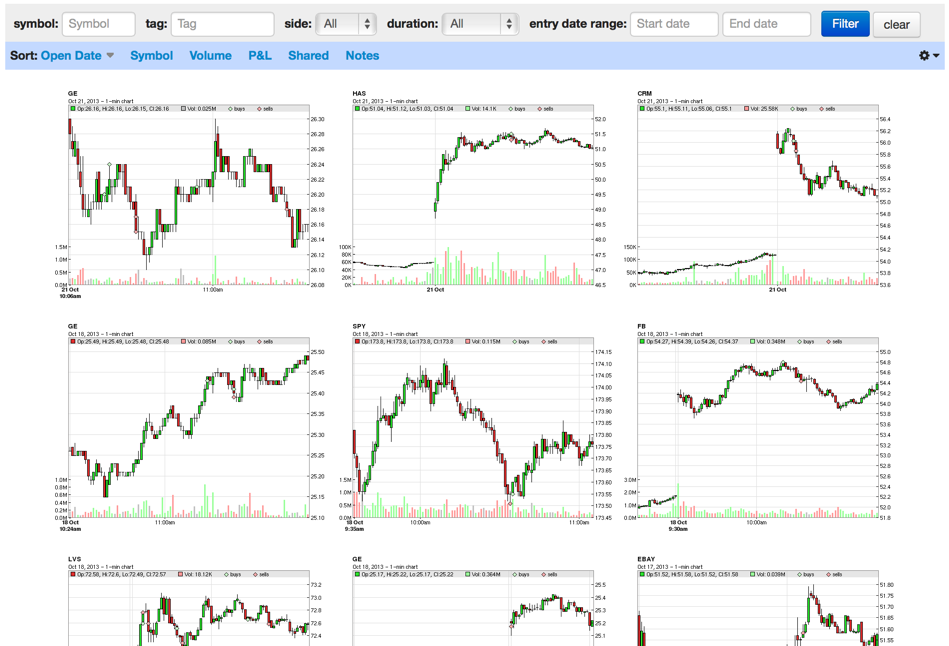 The charts views can be very useful for quickly identifying patterns visually in your trades, without having to open the detail view for each trade.

The charts displayed are automatically chosen from the charts you have configured for each trade, choosing the chart with the most detailed timeframe that will still show the entire trade (if possible). Any configured studies on the chosen chart will be shown.

The new Trades View modes are available today for all users!

We’ve added two more columns to the list of available columns in the Trades View:

Let us know if there are other columns you’d like to see in the Trades View!

With the new flexibility of being able to choose the columns you want to see in the Trades View, we’ve added even more. Two new columns available:

If there are other columns you’d like to see in the Trades View, let us know!

We’ve added two new columns to those available in the Trades View:

Both of these new columns will always show gross P&L, regardless of the P&L setting.  If you switch to net mode, their column titles will change to emphasize they are still gross.

Ever since Tradervue was first released, folks have been sending us email asking for certain columns to be added to the Trades View. We couldn’t add all the columns people asked for, as there wouldn’t be enough room on the page for them all.

But starting today, you can choose which columns you’d like to see on your Trades View! Simply click the setup icon on the right side of the list, and choose “Customize columns…” from the menu: 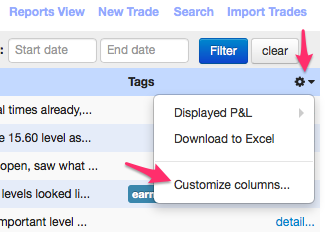 When you select that, you’ll see the list of available columns, and you can choose which ones you want to add: 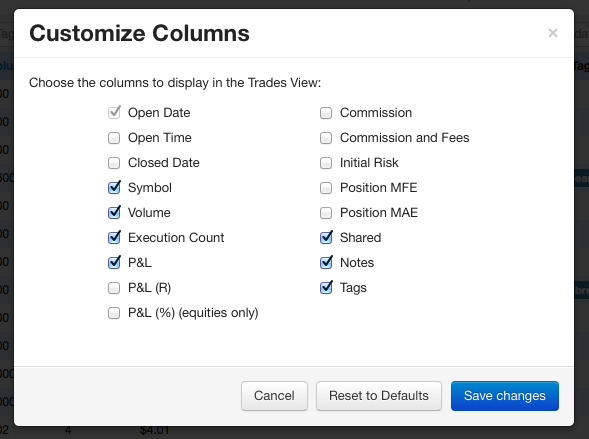 Clicking “Save changes” will save your new columns, or you can click “Reset to Defaults” to get back to the original columns.

The available columns are:

Some of these columns are only available for silver or gold subscribers.

As part of this change, we’ve also moved the links to change P&L gross/net display mode, and the download to Excel link, into the menu.

If there are more columns you’d like to see made available, let us know!

When you import your trades into Tradervue, they come in as a list of individual executions. Even something simple like buying 1000 shares might come in as buy 200, buy 400, and another buy 400. They might not even occur all at the same time – if you entered that order as a limit buy, there could be an arbitrary amount of time between the first and last execution. They also might execute on different venues.

But when you entered the order on your platform, you were thinking “buy 1000 shares”. All the rest is important, but in a higher level sense it’s all just details.

So when you import all of these trade executions into Tradervue, it uses an algorithm to group your trade executions together into logical trades. In highly simplified form, this algorithm basically starts a new trade if a) you change sides (e.g. long to short), or b) it’s been over a certain time limit since your last trade closed. Otherwise it may continue the prior trade.

What we’ve found is the vast majority of the time, Tradervue’s automatic trade grouping does what the trader would want, and the resultant logical trades match up with a “trade” in the trader’s mind. Occasionally, however, you might want to tweak this trade grouping.

So with that in mind, we have added two new functions in Tradervue:

If you click “Advanced”, and then “Split Trade” on the trade detail screen, you’ll see the trade split interface. On this screen you can choose the specific execution that should start the new trade, then click “Split Trade”. Not all of your executions can be selected – only those that would ensure the original trade is closed after the split.

For both split and merge, you will only see those options if they are applicable. For example, if a trade cannot be split, you will not see the Split Trade option. And if there are no eligible trades to merge with the current trade, you won’t see the Merge Trades option.

So all in all, you probably won’t need to use these features often, if at all. But if you want to be very specific in what you refer to as a “trade”, you can now fine-tune things as much as you like!