A couple of weeks ago, I was having a conversation over email with someone who was trying different stops and wanted to evaluate their effect on his performance. After thinking about this a bit, I wanted to mention a quick and dirty way to see whether using wider stops is effective for you.

To create the following chart in Tradervue, I went to Reports, clicked the Advanced tab, and selected: 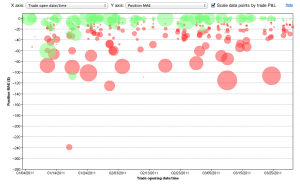 On the horizontal axis we’re plotting the trades against time; this doesn’t matter too much in this case, I just wanted to make sure we spread them out over the chart. On the vertical axis, we’re plotting the position MAE. This is the maximum interim loss we experienced in each trade. And finally, the size of each point represents the P&L of the trade. Green is a win, red is a loss, and the relative size of the point represents the magnitude…so big and red is bad, and big/green is good.

During this period, I was typically using stops on my positions that represented a total of $40 of risk. I was, however, experimenting with using larger stops for some trades.

Looking at the trades below the -$40 line, I see that there were a couple of wins (these would be trades that moved against me more than $40 during the trade, but turned around and became winners), but many more losses.

So in this case, we can see at a glance that in these particular circumstances, widening my stops to more than $40/trade was not effective. Not at all!

This is, of course, a very simplified way to look at your stops, and there are many more factors you may want to consider…but this gives you a quick view of what actually happened, and may allow you to make some decisions more quickly.

[Advanced reports used for this post are available for all silver and gold subscribers.]