If you don’t see your broker or platform on the supported list, let us know!

Tradervue merges executions into logical trades as you import your executions, and provides the ability to split or merge trades to give you flexibility in how they are grouped together.

It is fairly strict, however, with respect to exactly where you can split a trade apart. Specifically, it must be split at a point in the trade timeline where the position is flat. Normally, this is clear, but in the case of long-running option trades, there may not be a point where the overall position is flat. Consider the following option trade:

In this trade, we have purchased a June 170/175 call vertical. Later, we rolled this to July. What we’d like to see is the June vertical split out into its own trade, and have the July vertical start a new trade. However, we bought the July vertical on June 13, and sold the June on June 14 (or we could have let it expire). There was never a point during this trade where we were flat – so it cannot be split using the regular split facility.

There is a now a way to address this. We click the Advanced button just above the execution list, and we will see a new “Split options” link:

Click that, and we’ll see the new custom split page, where we see a list of all of our executions. We select the executions that should be split out into their own trade – in this case, the June vertical open and closing executions:

The automatic price charts in Tradervue can now be displayed on a 1-hour timeframe (by popular demand!): 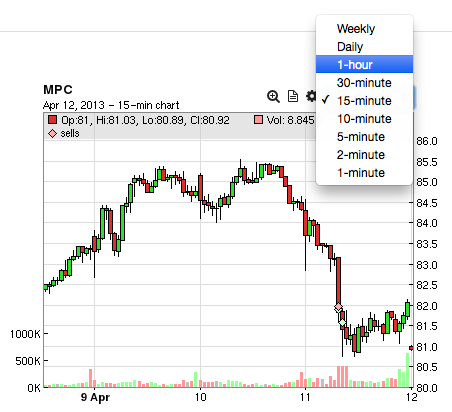